The car of the future: 5 innovative technologies in modern cars 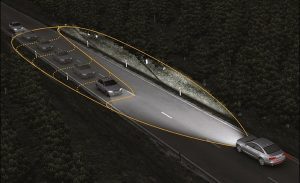 New features are constantly appearing in cars, some of which take root, and some turn out to be unpromising and die off. And today we will tell about five innovative technologies that are just beginning to be introduced in the automotive industry these days.

Wireless charging of gadgets in cars from Toyota is carried out using electromagnetic induction using Qi technology. A similar option is currently supported by some smartphones, for example, LG Nexus 4 and Nexus 5, as well as Nokia Lumia 920, 928 and 930.

In order to charge the phone or tablet without wires, you need to install the device in a special receiver on the car dashboard.

This technology can be considered the most expected in the entire car market. After all, what kind of car owner would not want his car to go to the right place on its own, without any intervention from the person? This technology was first developed and implemented by Google. Back in 2009, a car with an autopilot went to the roads of California.

The “eyes” of the car in this case are several cameras installed around the perimeter of the car. They monitor the situation on the road in real time and transmit the received information to the central processor, which is responsible for driving.

Autopilot, installed in the car, never violates the rules of the road, which significantly reduces the risk of getting into an accident. For five years of operation with Google mobiles, only a few annoying incidents on the road happened, and even those caused by third-party drivers.

The successful experience of operating cars with autopilot from Google has led to the fact that in some states in the United States there is already permission to use such cars on public roads on an ongoing basis.
Adaptive light

The one who drove along the roads in the dark day knows how unpleasant and dangerous the headlights of a car can be. Especially if the driver of this car forgot to switch the main beam to the dipped. To solve this problem, manufacturers begin to equip their cars with an adaptive light system.

Such technologies imply the absence of the need for the driver to engage in the switching of the headlights. Its intensity and direction will vary, depending on the current situation on the road. For example, when a car appears on the oncoming lane, the high beam will automatically change to dipped.

The system of adaptive light, which is now begun to equip Audi cars, also implies highlighting the internal zones during cornering, as well as scattering and reducing the intensity of light when driving behind another car.
Charging electric vehicles in 30 minutes

For a long time, electric cars could not win popularity due to the small power reserve and the huge amount of time needed to charge the batteries (8-10 hours). The sharp rise in sales of electric cars began after manufacturers developed technologies that can reduce the battery charging time by several times.

As an example, the company Nissan, which produces one of the most popular modern electric cars – Nissan Leaf. To popularize its creation, it deploys a network of special filling stations around the world, equipped with an innovative battery charging system.

Thanks to this system, 80 percent of Nissan Leaf batteries can be filled with electricity in just thirty minutes. This is the time for which you can leave to eat or drink coffee.