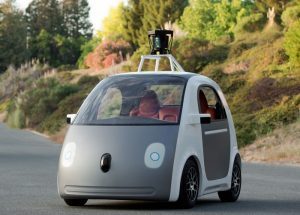 Recently it became known that some of the largest IT companies, previously known for the release of mobile devices or software, quite unexpectedly for the whole world decided to start producing cars. This includes, among other things, market giants such as Apple and Google. Today we will tell about 5 large IT-companies that are going to enter the car market, and try to figure out why they need it.

The American corporation Google is one of the pioneers in the creation of automotive autopilot technologies. Back in 2010, she presented several cars that could move on public roads in automatic mode without control from a live driver.

Cars with autopilot from Google can successfully pass from point A to point B, observing all the rules of the road on the road, guided by stationary signs and traffic light colors, as well as tracking the movement of other vehicles and pedestrians. Statistics show that riding on such cars is much safer than if the real driver was driving, because the autopilot system does not know the mistakes, as well as the subjective factor.

At first, Google used in its experiments with unmanned cars from other manufacturers, for example, Toyota Prius, Lexus RX460h and Audi TT models. However, not so long ago it became known that the main technology corporation of the world plans to start producing its own autonomous cars.

The project has the working title Google driverless car. It is developing a compact electric car, designed to carry two adults. The car can accelerate to a speed of 40 kilometers per hour and pass on one full charge of batteries up to 150 km.

Baidu Corporation from China is often called the “Chinese Google”, and this comparison is not an exaggeration. This company is the cornerstone of the Internet in China, it owns the largest search engine in the country with more than a billion people, its own online encyclopedia, map service, instant messengers, Internet browser, antivirus, and many other technological projects.

And in the middle of 2014, it became known that Baidu is actively working to create its own system of automobile autopilot. The Chinese corporation became the first company in the East, which began development in this area.

Moreover, Baidu plans in the future to start the production of its own cars – low-cost, high-tech and autonomous. The autopilot market in the West is developing at a rapid pace, and therefore China should not lag behind its competitors. Moreover, the Celestial Empire itself is a gigantic market with a half billion population. Therefore, Baidu doesn’t have to create an ideal machine that could be sold in Europe or the USA. This corporation’s main thing is to be the first to occupy an appropriate niche in their homeland.

He announced his desire to start producing his own cars and another Chinese technology giant, who until recently could not be suspected of the very possibility of such plans. We are talking about the company Xiaomi, known for the release of cheap but high-quality smartphones and some other mobile devices. If Baidu is called “Chinese Google”, then Xiaomi is “Chinese Apple”.

Like all other products from Xiaomi, car Xiaomi Misla, will be very high quality and incredibly cheap. The letters Mi in the name of this car are both Xiaomi’s proprietary “chip” and a hint at the class of this vehicle – the super mini. The letter “sla” is a roll over with popular electric vehicles from Tesla Motors.

Xiaomi Misla – cheap car from the Chinese company Tesla
Trade in Forex in UAH, you can start with only 3000 UAH
Trade on Forex in UAH, you can start with just …
Native Advertising Relap
Xiaomi promises that Xiaomi Misla will be one of the cheapest electric vehicles on the world market. Its price will be only 6400 US dollars. At the same time, the presentation of the car and the start of its sales are expected to take place already at the end of 2015. Such fast terms in the case of Xiaomi do not surprise at all, because everyone is accustomed to how quickly and effectively this Chinese company can act, which in just a few years has become one of the world’s three largest smartphone makers.