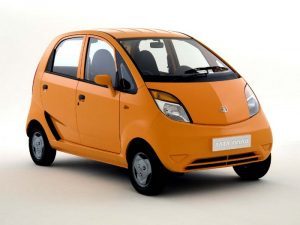 The economic crisis and the depreciation of the ruble forced many of our compatriots to give up their dreams of buying expensive cars. That is why in this review we will tell about 5 cheapest cars in the world. The list includes sedans and SUVs, and even electric cars.

Tata Nano – the cheapest car in the world

Of course, in any country in the world you can buy quite working cars for a price of one thousand dollars or even several hundred. But it will be used cars in the age of twenty to thirty years. And the cheapest car is the car from the Indian company Tata – the city car Tata Nano.
The creators of the Tata Nano proceeded from the long-known principle that a car is not a luxury, but a means of transportation. This car has a very simple technical specifications, there is no and there can not be window lifters or air conditioning. It is designed to ride, not for pathos.

Tata Nano has a 2-cylinder engine with a volume of 0.6 liters and a power of 33 horsepower. The car can accelerate to a maximum speed of 100 kilometers per hour.

But at the same time, the basic equipment of the Tata Nano is incredibly cheap – only 2500 US dollars. These cars are sold mainly in India.

Mobius One – the cheapest SUV in the world

If the Tata Nano is a car, primarily for India, then the car with the name Mobius One was created for use on the African continent. Mobius was established in Kenya by British engineers in order to provide this country and other African countries with cheap but durable machines.

Mobius One is the cheapest SUV in the world. It will cost the buyer only 6 thousand American dollars. For this money, a person will receive a fairly simple vehicle, in which there is no air conditioning, elegant trim and even most of the window glass (only frontal).
But the Mobius One was not created to proudly drive around the area, emphasizing its high social status. This is a hard-working machine for African off-road, for the poor inhabitants of the black continent, for whom it’s not comfort that is important to the car, but functionality and cheapness.

Renault Twizzy – the cheapest electric car in the world

Electric cars are expensive. Even electric versions of gasoline cars will cost customers much more expensive than the original cars. Nevertheless, there are several fairly low-cost electric cars that are accessible even to people with modest (by European standards, of course) incomes.

The cheapest serial car in the world at the moment is the Renault Twizy car. The price for the basic model of this machine is only 6990 euros.

Renault Twizzy – the cheapest electric car in the world
Renault Twizy is the perfect city car. It has an incredibly compact size and accommodates only two people – the d in this car are located one behind the other.

Renault Twizy can accelerate to a speed of 45 kilometers per hour and drive on one full charge of batteries up to 100 kilometers, which is quite enough when operating this car in an overloaded metropolis.

However, the EM01 Stradale Project car will not be able to race with the race cars from the best Formula 1 competition teams. This car is only styled for racing cars, it is designed for real fans of these competitions who want to transfer their aesthetics to the street life of big cities.
However, the EM01 Stradale Project still has enough
good technical characteristics. The manufacturer claims that the maximum speed of this car is 300 kilometers per hour, and the car can accelerate to only 100 km / h in just three seconds.