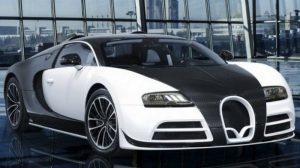 People who are fans of cars, certainly know the German company Mansory, which makes just great modifications of luxury cars. Here are 15 of the most extravagant cars that have been tuned Mansory.

1. Rolls Royce Wraith Palm Edition 999
As if Rolls Royce itself is not “extravagant”, Mansory decided to pour gold into a luxury car with a generous hand. The Palm Edition 999 was so named because it symbolizes the highest grade gold, and also because Mansory intended to build only 9 cars of this model. As for the exterior, the car received new spoilers and badges of pure gold.

The interior is also impressive: leather and gold are everywhere. Mansory engineers also took care of the new engine – they equipped the Rolls Royce Wraith with the upgraded V12 engine, which allows it to accelerate from 0 to 100 km / h in 4.4 seconds.

The car was equipped with a new gearbox, productive air filter and exhaust system. Since this version of Aventador is much more carbon elements, it is 50 kg lighter than the original. Thanks to this, the car accelerates from 0 to 100 km / h in 2.7 seconds.

3. Bugatti Veyron Mansory Vivere Edition
Undoubtedly, this is one of the most expensive cars in the world, because the Bugatti Veyron Mansory Vivere Edition is worth $ 3 million. Outside, the car has acquired LED front lights, modified wings, new alloy wheels and a shorter hood. The interior was finalized with black and white leather and LEDs. Also Veyron got new exhaust pipes and diffuser.

Of course, not a single car tuned by Mansory is complete without a large amount of carbon fiber, and the Vivere edition is no exception. This handsome man reaches a top speed of 410 km / h, and from zero to a hundred he accelerates in 2.6 seconds.

4. Mansory GT Race Bentley Continental
Mansory modified the Bentley Continental GT by adding a significant amount of carbon fiber panels and special skirts to optimize the air flow between the axles and the rear wings. A new engine and sports air filter have also been added. And, finally, the car was repainted in white and green tones. This Bentley develops a maximum speed of 330 km / h.

7. 458 Spider Monaco Edition
If you add more power and more carbon in the Ferrari 458 Spider, you get 458 Spider Monaco Edition. Mansory decided to add to the car a new skirt with large air intakes, a new hood and a new diffuser. All this is made of carbon fiber’s favorite material. This makes their car version 1 to 54 kg lighter than the original version, with the result that the 458 Spider accelerates to a hundred in 3.2 seconds.

And that is not all. Mansory also added sport shock absorbers and a new engine management system. The interior of the car is made in red and white colors, i.e. in the colors of the Principality of Monaco.