9 automotive trends, which in 2017 will change the transport to unrecognizability 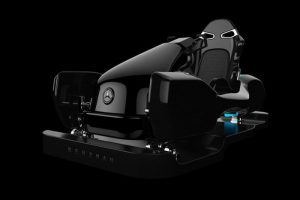 Every year, scientists, engineers, designers, designers and enthusiasts simply create incredible things for cars and everything connected with them. Here and in the new review were collected the most recent, we can say the March trends, which in high probability will capture the automotive market already this year and they (the trends) will begin their triumphal march right now.

1. Motorhomes
The development of modern technologies and the spread of innovative materials has made possible a new round of development of such a thing as a mobile home. Particularly popular compact trailers for survival, are able to bring the maximum comfort and comfort with a minimum load of the car. The TAXA ‘TigerMoth’ Trailer ‘trailer has become a prominent representative of recent times in this area. Despite its small size, it has everything you need from the kitchen to the bedroom.

2. Omnidirectional Helmets
Modern technology is pushing the entertainment industry at an incredible pace. The development of photo and video equipment, as well as the development of virtual reality technology, has allowed the creation of fundamentally new helmets for motorcyclists. A key feature of the new products was the increased viewing sector and the ability to record 360 videos without focusing on a certain point. One of these helmets is Real720 Helmet.

3. Ubiquitous use of LED
LED lighting is gaining increasing popularity. Already today, LED technology is literally at every turn. The automobile market did not become an exception, as Citroen presented several conceptual models with a wide use of this technology. Of course, far from LED is not the main feature of these cars, but nevertheless, this trend deserves attention.

4. Intellectual accessories
There is nothing surprising in the fact that in the XXI century, it is incredible distribution of “smart” gadgets and accessories. Nowadays, even DVRs are becoming “smart” and even additional functionality is overgrown. The brightest representative of such devices on the market recently is “Dride”. The most important thing is that this thing is really capable of making the ride safer.

5. “Immortal” wheels
Modern technologies and innovative materials allow you to create more and more incredible things, including fundamentally new wheels for cars. One of these is the conceptual “Green Hive”. The main feature of the wheels is their versatility. In theory, such can be installed on any machine, after which tires can be put on wheels of any size, thus making the wheel smaller or larger. Finally, wheels based on this technology will be very easy to repair.

6. Simulators
In the last two or three years, IT companies have taken an impressive step in the design and creation of VR technologies. For the first time in a long time, it became really clear that this direction has a future. Auto makers are already interested in the technology, in particular the company Mercedes, which introduced its own virtual simulator that allows you to get behind the wheel of a wide variety of cars. It is proposed to use such, both for entertainment and for training.

7. Compact motorcycles
In the last 5 years, a real rethinking of what a motorcycle is. Every year there are more and more curious conceptual samples of motorcycles. Not every one of them will break through to the market, but what is really important is that these samples allow us to promote new materials and technologies. One of the most interesting concepts of the last time was the Nazo motorcycle.

9. Flying cars
In fact, the first attempts to create individual urban flying transport were undertaken in the middle of the 20th century. Today, with the development of technology, the demand for “flying cars” has risen again. In many ways, this is facilitated by the development of electric motors and free riders. For example, the aircraft Sky2Go was designed specifically.